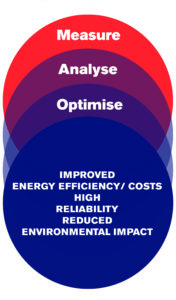 To measure is to know!

With a cost effective solution it is possible to:

The ClimaCheck Method, patented in 1986, has been used on many thousands of system by manufacturers, universities, test institutes and refrigeration technicians in over 20 countries. Hundreds of service contractors and consultants have seen the benefits of this new way of working. Several leading industry suppliers of refrigeration, air-conditioning and heat pump systems also use ClimaCheck to measure and document the performance of their products. In 2011 ClimaCheck was appointed “Climate Solver” by the World Wildlife Fund for its potential to combat global warming.

In 2014 ClimaCheck was recognized as one of the 25 most promising Nordic Cleantech start-ups. The jury motivates selecting ClimaCheck with the words: “ClimaCheck addresses the market of larger refrigeration & air conditioning equipment. The business idea is to realize best possible performance of the RAC-systems, using a unique method for online analysis. The result is commonly energy savings of 10 to 40%. Payback time for a ClimaCheck system will be very short, usually only a few months.” In 2017 Veckans Affärer (a swedish business magazine) and E.ON (leading energy provider) have nominated ClimaCheck as one of the finalists in E-Prize 2017 in the category “Energy efficiency”.

ClimaChecks’s mission is to help customers increase, and sustain, efficiency, reliability and lifetime of air-conditioning, refrigeration and heat pump systems through optimisation of performance. Read more…